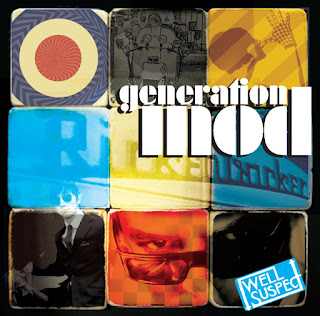 Ask any group of Mods what is Mod music and I am sure that you will get as many answers as there are Mods in the group. Some will opine that original RnB or Jazz is the only true Mod music, others will throw in some ska/bluebeat and then others will vociferously state that it’s the 79 revival that is the true Mod soundtrack as bands then were Mods in style and aspect. The point being that with such a long and varied history the old saying ‘There are many rooms in my father’s mansion’ is apposite and ‘Mod music’ now provides a fascinating wellspring from which to draw inspiration and direction. Well Suspect have tapped into this and have collated 14 tracks on this compilation that showcases current bands that come from a number of different points on the Mod compass. True not every genre is represented here but what there is gives a good cross section of the 50 plus years that Mods have been around digging tunes and looking resplendent. Opening track to the comp is Samuel S Parkes Let me go who has been lauded by Marta Reeves as the genuine spirit of Northern Soul, I don’t know what that means exactly but what he does deliver is a rousing stomping shouter that careers along on a rail of drums, tambourines and organ – our Sam has a credible set of pipes on him and gives it welly on this strangely satisfying outing. Daves Doors of Perception have popped up on the Dirty Mod comp from Well Suspect and their inclusion here is merited for what they deliver – hard and heavy psych on the gloriously messy Falling – think The Animals on acid. The Mads a legendary Italian revival outfit are still making wonderful noises and this one could have been cut in say circa 1981 – clean guitar and pin point vocal delivery and the ubiquitous band backing vocals evoke that period when we jumped about in cheap suits full of even cheaper booze. Great fun and takes me back. Men of North Country have been playing northern inspired soul for some years and are dab hands at the genre. ‘They Don’t know’ is a mid-tempo solid soul shuffler that with careful listening will reveal lovely little homages to original sixties soul arrangements. Brass is delicious in this one. New Street Adventure have been doing their thing for a few years now and are adept at their mix of soul and funk, here they come straight out of the Soul trap and race off like greyhounds. Deep drums, lush guitars and Nick Corbins vocals all race through this forceful stomper displaying them at the top of their game. French Boutik is probably the coolest combo doing the rounds at the moment but then that’s easy for them, they are, after all, French. Oozing Gallic charm Mieux comme ca is another 100kph track taking from their 2014 EP, delivered in their usual Pop Modernsite style. I could write about this gang for hours but I will just say that it’s one of the highlights of the compilation…Fuck me pink but I love this band. It wasn’t until I read the liner notes that I realised Dogtooth are all teenagers and to be honest you wouldn’t think it such is their mastery. Unlike the The Strypes they haven’t looked back to the original Rhythm and Blues scene rather, wearing their hearts on their collective sleeve, they are harking back to that Britpop period and deliver raunchy guitar rock that evokes images of Oasis before they went all poxy. Guitars are dense with reverb and the whole effect is of a young group well in control of their brief. Definitely be following up these lads to get their story. The Get Go give us a cover of Nutbush City Limits – a little too close to the original for my taste but I tell you what its fecking powerful all the same. Wellers I got by in Time (from In the City) gets a revamp by Private Jones and is reimagined as a Motown dancer that works really well and captures the spirit of young America perfectly. Smashing Time skank it up in a two tone style on the rollicking good natured knees up of ‘Don’t try so Hard’. Andy Lewis delivers what could possibly be a sermon on the current middle age of the Mod scene. As per usual with Lewis the arrangement is perfect, clean and crystal clear – a master class in construction and delivery for sure. I don’t know where to categorise Soldiers of Soul ‘Raw’ as it jumps from acid jazz to nu soul to Cinema scope and back again. I doubt Mod purists will get this one. The Moons round off this Mod musical smorgasbord with Everyday Heroes. I have to admit that I wouldn’t be their number 1 fan but on this outing it might be time for me to reappraise my opinion, maybe it’s just me being more open but there is a considered freshness to this one that I had not copped onto before.

There you go, a rambling account of this smart little compilation. Don’t just take my word for it. Go buy one and listen to it yourself

Generation Mod is available from wellsuspect.com in Vinyl, CD and digital formats


Samuel L. Parkes - Let Me Go.
Dave's Doors Of Perception - Falling.
The Mads - What I Need.
Men Of North Country - They Don't Know.
Private Jones - I Got By In Time.
French Boutik - Mieux Comme Ca.
Dogtooth - Get In Get Out.
The Get-Go - Nutbush City Limit.
Aunt Nelly - So Sad.
New Street Adventure - Be Somebody.
Smashing Time - Don't Try So Hard.
Andy Lewis - The Best Of Days.
Soldiers Of Soul - Raw.
The Moons - Everyday Heroes.
on June 30, 2016