On the Bus - The Mads - area pirata 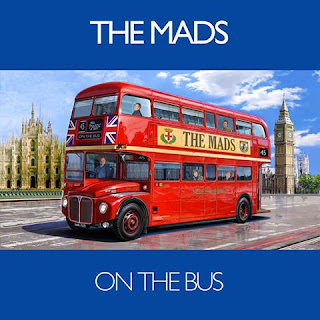 Formed in 1979 The Mads have long been admirers of the sixties beat sound and contemporary (at the time) revival bands. They played for a five or six years back in the day and, as these things usually happen, split up when life intervened. Regular work ensued on other projects for the guys but for this bunch of school friends there really was only one band that mattered. The lads reformed in 2012 and happily have re-found that classic Mod mojo from yesteryear and, going by the new stuff that I have heard recently, have lost none of their powers to entrance and beguile with their brand of power pop.

‘On the Bus’ is the bands second physical release (have a look at Generation Mod for few words on first release) and on this they have delivered a swinging yet at times, hard edged three plus minutes of Sixties inspired Mod rock. Introduction to the track reminds me of something that might be found on a long lost outtake from an Abbey Road session, recorded late at night when the booze and cigarettes are out and the creative juices are flowing. Compared to their original tracks (they have a clutch of 79/81 tracks on the Well Suspect Beat Generation and angry young men compilation) there’s a marked difference yet at the same time a consistency to what the guys are doing. Are they stuck in the past flicking off three chord tricks and posing in a Mirror? Certainly not, that would be just ridiculous. Its 30 or so years later, the guys have grown physically and musically older and that is brought to bear on the music they produce – no more the angry polemics of youth but a considered introspection both lyrically and musically essaying from the speakers to calm your furrowed middle aged brow. And you know what? That suits me right down to the ground.

On the b-side the guys are more clearly wearing their beat influences on their sleeve with the witty and charming ‘The way she Smiles’. Not a million miles away from a Kinks song there’s a lovely smell of Swinging London trippy psych off this one.

With Just a couple of guitars, bass and drums, the classic line up says I, and some pitch perfect vocals both sides of this 45 are sparkling, like little lost nuggets finally unearthed and ready to shine.

This single gets a digital release on July 13th from all the usual venues. Physical release on Blue Vinyl 45 will be in August.

For more info about the band go to The Mads Website .

To pick up a copy of the bands first release 'What i Need' go the website or you can get one over at the bandcamp page . Also at their bandcamp page they have a number of free digital EP's well worth the time to download.
on July 07, 2016