The Beat Generation and the Angry young men - Well Suspect 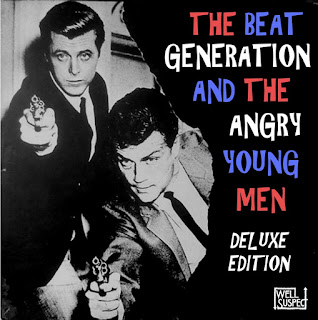 30 plus years after its original release Well Suspect have brought back to the shelves the seminal compilation of the early eighties that collected the cream of the revival bands together for the first time. Positioned as a deluxe edition the Merton Parkas tracks are dropped and included on this release are 5 tracks from Italian revival outfit The Mads.  With 18 tracks featuring the Purple Hearts, Les Elite, The Mads, Long Tall Shorty, Directions and Small Hours there’s a wholly edifying broad range of styles contained here. From the Harmonica rnb of LTS to the urban smart sound of The Mads via the accomplished sound of Purple Hearts and onwards to the, in my mind, anthemic sound of Directions, it’s no wonder that the LP has been cited as so influential on those who listened first time around (or anytime since, I guess). Stand out tracks for me have to be the two Directions tracks which were the original reason why I bought the LP back in the day as a youngster, adding halfpence to pence fumbling amongst the greasy coppers till I had enough to make the purchase. Les Elite and Purple Hearts still sound as angry and youthful as they did when I heard them first time around as a young Sta-prest button down collared Moddy boy. Small Hours are definitely on my follow up list to hear more of their tunes, I neglected them first time around so I shall be happy to acquaint myself with their output at this juncture. Thankfully the comp has not aged and all the tracks here stand up well to the intervening years and for those who were not around during those halcyon days this set gives a limited sense of the musical scene at the time. I mention The Mads included here and to be fair if they had been a Brit band they would have been a shoo-in for inclusion on the original release not only were they steeped in the form of revival Mod tunes but at the same time they were moving onward to new forms. Take for example Velvet Gloss that finishes the compilation – ten years or so after its release, the Brit poppers were making the same kind of sounds in stadia around the world. And that I think is the legacy of the revival bands – they kicked the can down the road for the next generation to pick up and the bands compiled here are the epitome of that youth led, new wave expression.